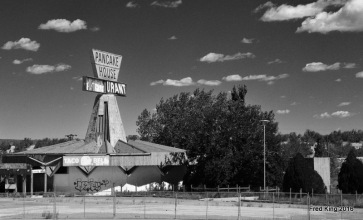 Back from Brooklyn, so back to posting the Mothership adventures from August. some views from the cockpit as we moved through the Desert Southwest.

Just an unrelated aside: My flight from JFK was supposed to leave at 4:00pm EST. We boarded, taxied out on the tarmac and got in line for takeoff. As we waited our turn a fast moving storm cell moved in and the traffic controllers stopped all take-offs. We sat in the plane for over two hours as a second storm cell moved through. By this time the 757-200 did not have enough fuel to make the trip to Seattle so the airline ( which I shall not name) decided we had to give up our take off position and go back to the gate. We deplaned at a different gate and waited, thinking they would just add fuel and we would be on our way. NOOOO, instead we were given vague reasons for another three hours while the nearly 200 of us lingered, slept, did whatever. Finally, at 5 hours after our original departure time we reboarded and were told since we had left the take off line we were now being moved to the last position of flights waiting to take off. We were spot 27, so we taxied for nearly a half hour ( enough time to drive the plane to New Jersey!) and took our place, to wait our turn. Finally lifting off we had to go against the jet stream, which made the flight longer than usual. We pulled into Seattle at 1:00am local time, 4:00 am EST. There were a lot of exhausted passengers! To top it off, the Seahawks lost that afternoon :-(.